preliminary remark: this is no blog about Git against Mercurial or EGit against HgEclipse. While preparing to publish sourcecode of redView and red-open, we decided to switch to a DistributedVersionControlSystem (DVCS). The main question for me: which plugin is easiest to use. now. I’m not an expert of DVCS yet, because I’m just starting to use them. This blog series reflects my experiences. Please add your comments where I’m wrong.

At first I read some blogs about Git and Mercurial and the use of DVCS. I can recommend to read:

I decided to test Mercurial and Git together with Eclipse Plugins HgEclipse and EGit. I’m doing my daily work using Eclipse, so for me the most important thing is how useful and easy is the Eclipse integration of a DVCS. I don’t want to compare each detail and functionality of Git or Mercurial – I’m only looking for a tool to make this easy for me:

At the end of the blog series we’ll see how it works using EGit or HgEclipse. My evaluation was done at first under OSX.

To understand Git and Mercurial, here are some useful Links:

To get some info about the Eclipse Plugins, here are also some links:

HgEclipse is a fork of MercurialEclipse to force development of Eclipse integration. In my tests I’m using the 1.6.0 snapshots updatesite.

Besides the Eclipse Team Provider Plugins we also have to install Git and Mercurial, because (as of today) some tasks can only be done from the commandline.

→ recently added a more detailed step-by-step-installation-guide for Git and also how to configure ssh.

For OSX there’s an easy to use Installer: http://code.google.com/p/git-osx-installer/ – simply follow the instructions and you’re done.

To install Git under Windows here’s a good Guide to follow: http://github.com/guides/using-git-and-github-for-the-windows-for-newbies.
Under Ubuntu simply type this:

As next we have to tell Git your user informations:

Easiest way is to use an UpdateSite – in my tests I used the nightly builds: http://download.eclipse.org/egit/updates-nightly.

Please select EGit and JGit to be installed. That’s all – you’re ready to use EGit.

Please take a look at the Preferences…

…to see if the defaults fit your needs.

→ recently added a more detailed step-by-step-installation-guide for Mercurial on OSX, Ubuntu and Windows and also how to configure ssh. 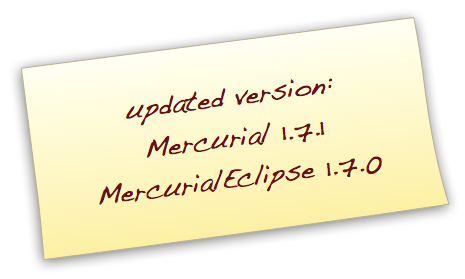 Same as using Git we have to tell Mercurial some user informations. Mercurial searches for user data in a file named “hgrc“:

I place this file in my  repositories directly below .hg:

You should use MercurialEclipse 1.7.0 or later – there were huge performance improvements from 1.6.x to 1.7.0.

Unfortunately Intland changed the behaviour of the Updatesite

and this is the Updatesite for the snapshots of upcoming 1.8.x:

Please select “MercurialEclipse” on all platforms.

There are two important properties you should fill out:

Apply changes and you’re done with Installation of Mercurial and HgEclipse.

Summary part 1: its nearly the same work to install Git + EGit or Mercurial + HgEclipse. Only under Windows the Mercurial + HgEclipse – Installation is a one-step-process through HgEclipse UpdateSite – unfortunately this comfort isn’t available under OSX and Ubuntu. EGit also includes JGit – but we’ll see later that in some cases we still need Git itself also to be installed.

Update 2010-11-20: MercurialEclipse Version 1.7.0 was released, unfortunately the Updatesites now needs an account and password from JavaForge, to avoid this please use Updatesites from EclipseLabs for the stable release 1.7.0 and this site for the 1.8.x snapshots. Update to 1.7.0 is really recommended

The overview of this blog series can be found here: https://ekkescorner.wordpress.com/blog-series/git-mercurial/. The next part will tell you how to initialize local repositories using Egit and HgEclipse.